GOLDEN DIONYSOS
The Golden Dionysos awards goes to the film “Index” directed by Nikolas Kolovos. For the skillful camera choreography in a 12-minute one-take and the wonderful utilization of the cinematic language, which underlines a universal issue starting from a child’s desperate action. The award is accompanied by two prizes: Finos Film offers a cash prize of 4,000 €, ERT offers a cash prize of 3,000 €.

Award for Best Direction
The Best Direction award goes to the film “The distance between us and the sky”, directed by Vasilis Kekatos. For having the best rhythm, for the successful dialogues and especially successful use of the frame into building a new relationship between the two boys. The award is accompanied by lab provisions and post production services of a value of 2,500 €, offered by Stefilm company.

Greeks of the World Award
The award goes to the film “Sleepwalking”, directed by Melissa Anastasi. For the fear and expectation that the filming choices of the director cause viewers, in order to force the main character in unprecedented actions at a very young age. The award is accompanied by a cash prize of 2,000 €, offered by the Greek Film Center.

Documentary Award
The award goes to the film “Cleoniki”, directed by Anna Antonopoulou. For highlighting the character and the imprint of an era that is about to disappear, through the memory and the life of a super-centenarian old woman. The award is accompanied by a cash prize of 1,000 €, offered by ERT.

«DINOS KATSOURIDIS», Special Award for the Best Newcomer Director
The award goes to the film “Rouge”, directed by Kostis Theodosopoulos. For his complete and meaningful 1st appearance as a filmmaker. In memory of the great Greek filmmaker, the Katsouridis family keeps sponsoring the award he had established 19 years ago and offers the director full technical coverage for the production of his next film.

Best Student Film Award
The award goes to the film “Sad girl weekend”, directed by Dimitris Tsakaleas and Leda Vartzioti. For the borderline moment of the end of a carefree era and the passing to a new situation. The award is accompanied by lab provisions and post production services of a value of 2,500 €, offered by Stefilm company.

Tonia Marketaki Award for Best Female Director
The award goes to the film “I am Mackenzie”, directed by Artemis Anastasiadou. For the director’s fresh look and correct record of the intense feelings during the passage from adolescence to the early adulthood. The award is accompanied by a cash prize of 2,500 €, offered by the Greek Film Center.

Best Screenplay Award
The award goes to Kostis Theodossopoulos for the film “Rouge”, which he also directed. For a charming group of girlfriends that take the viewer on a self –awareness journey.

Best Cinematography Honorary Distinction
To Giorgos Frentzos GSC for the cinematography of the film “The weight of the sea”, directed by Kostis Alevizos.

Honorary Distinction for Best Editing
To Livia Neroutsopoulou for the editing of the film “Postcards from the end of the world”, by Konstantinos Antonopoulos.

Honorary Distinction for an Actress in Leading Role
To Sissy Toumasi for her performance in the film “The weight of the sea”, by Kostis Alevizos.

Honorary Distinction for Actor in a Leading Role
To Nikolakis Zeginoglou for his performance in the film “The distance between us and the sky”, by Vasilis Kekatos.

Honorary Distinction for Best Sound
To Giannis Antypas for the film “Pathologies of everyday life”, directed by Alexandros Papathanassopoulos.

Honorary Distinction for Best Original Music
To Nikos Giannakakis and Dimitris Giannoulis for the music of the film “Chopper”, by Giorgos Kapsanakis.

Honorary Distinction for Best Set
To Christos Symeonidis for the film “Flickering souls at night”, by Iakovos Panagopoulos.

Honorary Distinction for Best Costumes
To Vaggelis Kaberis for the film “Sad girl weekend”, by Dimitris Tsakaleas and Lida Vartzioti.

Honorary Distinction for Best Make-up
To Ioanna Lygizou for the film “Rouge”, by Kostis Theodossopoulos.

Honorary Distinction for Special Effects
To Giannis Patsiaouras and Berta Valverde for the film “W”, by Stelios Koupetoris.

Special Mention
The special mention goes to Alexandros Kakaniaris for the film “The dude” To a film that wanders around in a world that is tailor-made for its main character, who while seems not to fit anywhere, fits everywhere nevertheless.

Special Mention
The special mention goes to Ioko-Ioannis Kotidis for his outstanding performance in the film “The distance between us and the sky” by Vasilis Kekatos.

PITCHING LAB FINOS FILM AWARD
Finos Film bestows the “PITCHING LAB” award for the 42 nd  Short Film Festival in Drama to Anngelica-Marie Eshesimua  and Matthew Allen for the project  “The Broken Key”– USA. The award is accompanied by a cash prize of 1,500 €, offered by Finos Film.

PITCHING LAB GREEK FILM CENTER AWARD
The Greek Film Center bestows the “PITCHING LAB” award for the 42nd Short Film Festival in Drama to Marta Gonzalez De La Vega for the project “The Valdomeros” – Spain, as financial support with the cash prize of 2,000 € for the production of the film.

Greek Film Clubs Association Award
The Greek Film Clubs Association bestows a Best Film Award for the National Competition Section of the 42 nd  Short Film Festival in Drama to the film “Mila” by Andreas Vakalios, because it deals with the subject of breaking family bonds in its own way, with directness, narrative thoroughness, a critical realistic view, sensitivity, humor, dynamic capturing and vibrant illustration of characters. Mila is in the middle of their parents’ fights, caused mainly by her father, but refuses to be crushed. She rolls on her board on the slippery water without crashing.

Greek Film Critics Association
For the accuracy with which it condenses the story of a broken family, reads the characters it consists of and expresses their drama through the expressive figures of its protagonists. The Greek Film Critics Association bestows the award for best Greek film to the film “Mila” by Andreas Vakalios, who, in a year, manages to balance on a skateboard from the high speed of a “Death Car”.

Award for Technical Excellence by the Film, Television & Audiovisual Technicians Union
To the film “W” by Stelios Koupetoris.

Grand Prix 2019
To the film “Brotherhood” from Tunisia-Canada-Qatar-Sweden, by Meryam Joober. The Grand Prix Drama 2019 is awarded to a film that preserves its characters’ authenticity, initiative at the aesthetics of direction and manages to give a tone of a documentary while capturing a modern tragedy. The award is accompanied by 4,000 €, prize provided by Raycap company.

Best Director
To the film “Lake of happiness” from Belarus-Germany-Spain, by Aliaksei Paluyan. For the sensitive story and the personal directing style that filled the audience with emotions.

Drama Short Film Candidate for the European Film Awards 2019
To the film “Weightlifter” from Ukraine-Poland, by Dmytro Sukholytkyy-Sobchuk. For the strong directing and the power of the protagonist’s situation in the universe of Ukrainian weightlifting.

Best Production Awards “TV5 MONDE”
To the film “Maras” from Spain, by Salvador Calvo. To an action film with a very convincing style that is about a politically frustrating case of people that are trapped between two continents.

#ThisisEU – European Values
To the film “Confession” from Cyprus, by Andreas Sheittanis. For its antiwar message and the showcasing of the importance of the supreme good of peace and reconciliation, qualities on which the European construction is based on, the jury selected a film, in which the director creates a two-way relationship between the occupied and the occupier, between authority and religion, when the principles and values of each side are being tested, providing hope for a better tomorrow.

Best Southeastern European Film Award
To the film “Nellie” from Slovenia, by Gaja Möderndorfer For the empathetic imaginary world of a child that passes through the shadows and the light of the screen to narrate a story about a family universe somewhere in southeastern Europe.

Best Animation Film Award
To the film “Story” from Poland, by Jolanta Bankowska. The best animation film award is offered to a film that reflects modern society in a time of omnipresent technology in an ironic style filled with humorous and painful messages.

Special Mention
To the film “Pinky Promise” from Germany, by Sophie Linnenbaum. A sarcastic comedy playing with the lines between fear and love, a relentless satire of the democracy and dictatorship of speech.

FIPRESCI Award
The FIPRESCI Jury that consists of: Igor Angjelkov from North Macedonia, Louise Dumas from France, Giannis Fragoulis from Greece bestows the FIPRESCI Award to the film “Brotherhood” from Tunisia- Canada-Qatar-Sweden, by Meryam Joober.

Hellenic Parliament TV Channel Award
The television channel of the Parliament bestows, for the fourth year, the “Human Values” Award of the Hellenic Parliament to a film of the international program of the festival, which crafts a bold surrealistic allegory for inhumanity, irrationalism and fanaticism that the formalistic compliance to impersonal rules can bring, in an imaginative way. It is bestowed to the film “Pinky Promise” by Sophie Linnenbaum, from Germany. 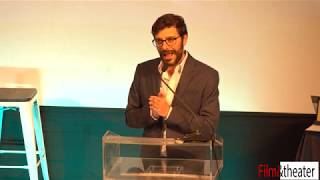 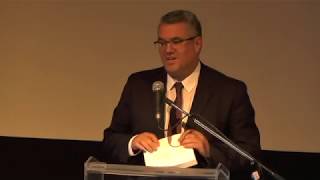 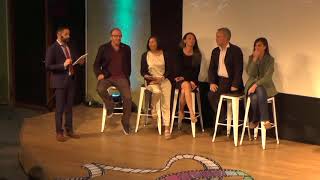